Technically only 87 million in euros, but who’s counting? Universal Display Corporation (“UDC”), a leader in research, development and commercialization of organic light emitting diode technology (known to the rest of the high-tech world as OLEDs) recently acquired an extensive portfolio of OLED patents from German research giant, BASF. Included in the package was more than 500 granted and pending patents relating specifically to BASF’s fifteen-year love affair with PHOLEDs, the phosphorescent version of OLEDs. What’s UDC’s plan? To be the frontrunner when this incredible organic light technology finally makes its way to the iMarket. 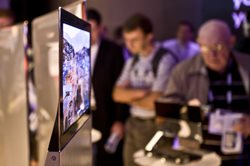 BASF had been “in the blue” for quite some time, devoting more than fifteen years and copious funds into PHOLED research and development, with a targeted focus on blue emitters. Despite being one of the industry’s leaders in OLED chemistry development, BASF made an internal decision last year to quietly withdraw from the OLED technology venture and seek a buyer for its patent portfolio. Finding its phosphorescence developments to be a valuable addition to UDC’s already extensive OLED patent collection, BASF agreed to sell over 500 PHOLED patents to the OLED giant, raising UDC’s OLED patent portfolio to over 3,600.

We recently touched on the potential capabilities for OLED screens in our “SmartLens” article, but BASF’s phosphorescence approach is putting a new spin on things. Imagine a window—a clear, see-through window—that suddenly turns into an opaque light. They produced an interesting video showcasing the technology. It is clear, translucent glass that can transform into a display screen—currently for white, blue or red phosphorescent light. In the future, that’s likely to expand to include even more advanced options, like a picture, television, interactive map, or fully-functioning smart screen. The possibilities are endless. At least that’s what UDC is banking on.

The recent $96M BASF acquisition was not the first and will likely not be the last in this area. Just a few weeks prior, UDC announced its plan to acquire Adesis, Inc., an organometallic synthetic research company to help advance its initiatives in the rapidly-evolving OLED industry. This acquisition was to the tune of $36M. Okay, now we are counting. It’s clear UDC has its eye on cornering the OLED market. The question is, “Why?” It seems they want a significant bite of the apple.

Rumor has it Apple is planning to adopt the OLED technology in its 2017 iPhone. With Apple boasting one billion active iPhone users worldwide in the first quarter of 2016, inclusion in the 2017 iPhone version would guarantee UDC some serious fruit for its labor. On its website, UDC already proclaims to have “one of the largest patent portfolios in the OLED field with licensing rights to over 3,000 issued and pending patents worldwide in a broad array of OLED technologies, materials and processes,” as well as 30 business agreements with leading OLED manufacturers like LG and Samsung. With the recent BASF acquisition, it is definitely poised to be one of the top beneficiaries of Apple’s rumored OLED adoption in the iPhone 7. With OLED technology, Apple’s already-impressive LCD screen could be thinner, smarter, perhaps even flexible.

There have also been rumors the new iPhone will not have a home button. Without that, it’s hard to imagine how we will close an app and open a new one. But, then again, it wasn’t long ago, none of us even knew what an “app” was. Now that “service” may become available everywhere—the window you’re looking through on the Metro, the rearview mirror in your car, the door to your microwave.

We’re curious: Where do you think we will see the biggest use of OLED screens in the future?