Bombs Away! Qualifying Experts From the Trenches

You see that line often in action movies. The slick-witted, irritatingly lucky action star tells his nervous sidekick, “We can’t get out this way if the bomb goes off.” The sidekick asks Bruce how he knows that and Bruce says “I just do.” How? Experience, that’s how. Is that enough to make Bruce an expert on the matter? According to a recent opinion from the Northern District of New York, it is.

Assume you’re handling a securities fraud case where it is 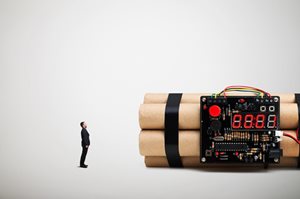 alleged that your fiduciaries should have implemented a blackout period (where loans and distributions are temporarily suspended) in the face of a possible merger. Let’s say we were able to find you a super sharp expert with an Accredited Investment Fiduciary Designation and over fifteen years of experience as a professional fiduciary providing trustee and other fiduciary services to employee retirement benefit plans governed by ERISA. What does Mr. Designation say about this pesky blackout requirement? That it was not required at all.

Much like our brave action hero simply knows from experience if the bomb goes off, that hallway will be completely blacked out with smoke, Mr. Designation knows—from his many years of experience acting as a fiduciary—that the imposition of a blackout period for reasons that are not purely administrative (change of a third party administrator or service provider, for example) are, in his words “extremely rare.” Further, in the context of a possible merger, he states industry standards do not require a fiduciary to consider implementation of a blackout period until there is an executed contract in place confirming the acquisition. Now how does Mr. Designation know all of this? Through his extensive experience as a fiduciary of course.  Without citation to a particular governing standard or rule, is his experience alone enough under Rule 702? Yes.

As the Northern District of New York put it: “Rule 702 expressly contemplates that an expert may be qualified on the basis of experience. In certain fields, experience is the predominant, if not sole, basis for a great deal of reliable expert testimony,” citing the Advisory Committee Notes to Rule 702. While the opposition whined about Mr. Designation’s failure to cite a “single document, rule, code, manual, text,” etc. supporting his opinion concerning the industry standard, the court rightfully stated he doesn’t have to. If the expert has sufficient experience with it, that alone can stand as support for his opinion.

Meaning, no matter how hard the nervous sidekick pushes Bruce to quote a “document, rule, or code” proving his bomb exit theory, Bruce doesn’t have to give him anything. If he is sufficiently experienced in the physics of explosions (aren’t all action heroes?), he can simply say: “I just do.” Isn’t that the expert you want taking the stand for you anyway? Someone who knows from experience and has the scars to prove it? Not someone with a clipboard, waving a rule book, but, rather, a professional who can say: “I know because I’ve been there.  I’ve been doing this for years and I know how to do it right, because I’ve seen it done wrong and had it blow up in my face.” That’s an expert the jury is likely to listen to.

Have you had success with an expert whose experience is entirely on-the-job training, as opposed to rule books or codes?