The books and reports sat stacked in front of her like a teetering tower. I’ll never forget it.  Her voice was peeping out from behind them and sounded like a mouse. It was one of the most effective cross-examinations of an expert I have ever seen. The trick? While it is important to question experts about the facts and bases for their conclusion, don’t miss an opportunity to hammer them on the things they failed to consider.

It was a costly, drawn-out litigation – a business divorce that had gone south. The expert on the stand 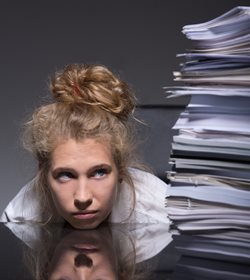 was an exceptionally qualified, competent, seasoned financial expert. She had the unfortunate luck, however, of working for a client who seemed to think it was a good idea not to provide her with all of the financial records for her to consider in reaching her conclusions on damages. Now my senior partner was stacking them in front of her ─ reams and reams of ledgers, profit and loss statements, bank statements, accordion-style files chock full of records ─ until she was no longer visible behind them. Like I said, it was not her fault. I really did feel sorry for her at that moment. But, a recent opinion from the Northern District of California reminded me, it would have been our fault had we missed this opportunity by jumping the gun with a premature Daubert motion attempting to exclude this expert because she failed to consider certain evidence.

Before the California court was a similarly-based Daubert motion. While it was a trademark infringement action, the real battle that emerged between the parties was a vicious and vehemently-litigated accusation of intentional spoliation of evidence resulting from a very curious power surge that conveniently destroyed computers and hundreds of digital files on the defense side. As you can imagine, experts were brought in on this matter. With its Daubert motion, the defense sought to exclude the plaintiff’s expert, a licensed professional engineer, who found no abnormal electrical activity in the surrounding area on the day of the alleged power surge and opined that no such surge occurred.

The basis for the Daubert motion? The expert’s failure to consider the report of an electrician who performed work on the site after the alleged surge. The court’s response? “The relative weakness or strength of the factual underpinnings of the expert’s opinion goes to weight and credibility, rather than admissibility.” Bergen v. F/V St. Patrick, 816 F.2d 1345, 1352 n.5 (9th Cir. 1987). Meaning, an expert’s failure to consider certain evidence is something for the jury to consider and something you may want to vigorously question the expert on during cross-examination. Remember the mouse behind the books! Failure to consider critical evidence may play in your favor if you let it play out before the jury.

As if this power surge opinion wasn’t interesting enough, although the court rightfully found exclusion to be improper based on a failure to consider certain evidence, the judge also noted his belief that the jury might find (as it seemed he certainly had) the report of the electrician who allegedly performed work on the site after the surge to also be fabricated. Imagine the power (no pun intended) of that question on the stand:

Q:  “Mr. Expert, why didn’t you consider the report of this electrician?”

Have you ever had an interesting outcome as a result of evidence that an expert failed to consider? Share your expert experiences below.