Dunkin’ Donuts: Your Munchkin Is Showing

A mashed-up nugget of croissant and donut - sounds good, doesn’t it?  Andrew Douglass, applicant for the registered trademark “cromunchkin” seemed to think so, which is why he attempted to register the trademark in order to sell it to Dunkin’ Donuts.  After having successfully sold millions of croissant donut knock-offs without violating the “cronut” trademark, it seems Dunkin’ will now hold the title in the cromunchkin department as well due to a rookie mistake by Douglass in his trademark application. 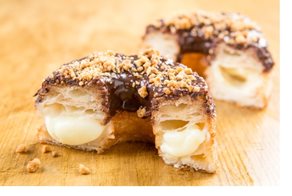 The cromunchkin is an offshoot of the original cornerstone of this wild pastry war: the cronut.  When Manhattan baker, Dominique Ansel, began selling the croissant-donut hybrid in his SoHo pastry shop, he struggled to produce enough hybrids to meet the constant line-out-the-door demand.  Ignited by the hybrid’s instant success, Ansel immediately filed a trademark application and successfully registered his smashing pastry hit─the cronut─as the reigning croissant-donut king.  But, what is it they say about imitation?  It’s the highest form of flattery.  The insane success of Ansel’s SoHo creation caused a slew of knock-off cronuts to crop up.  While Dunkin’ was assuredly going to jump on the cronut wagon, it decided to play it safe with a mild-mannered, cautiously-named “Croissant Donut.”  Caution proved to be key when Dunkin’s croissant donut sold over 8.5 million, proving itself as the most successful limited-time-offer item in Dunkin’ history and sparking plans for Dunkin’ to incorporate it as a permanent menu item.

This careful and successful tiptoe by Dunkin’ around the cronut trademark proved Dunkin’s status as a trademark-savvy player in the world of protected pastry inventions.  Hence, it was no surprise when Dunkin’ was quick to oppose a young New Jersey chef’s attempt to use Dunkin’s registered “munchkin” trademark (the name for Dunkin’s famous donut holes) in another croissant-donut hybrid: the “cromunchkin”─a mashed-up nugget of croissant and donut.  After the trademark application was filed, Dunkin’ contacted the applicant’s attorney, who also turned out to be his father, to discuss the application and Douglass’s father advised that his son never had any intent to actually use the “cromunchkin” mark.  Rather, he filed the application merely to register the trademark because he thought it would be something Dunkin’ Donuts might want to use and he could then sell the trademark to the donut dynasty for big dollars.  A brilliant idea in theory.  As you know, one of the key components of an intent-to-use application is the─say it with me─intent to use.  You must represent to the USPTO that you intend to use the mark within six months of the date the mark is approved for registration.  Without a bonafide intent to use the mark Dunkin’ argued, an intent-to-use application is essentially void ab initio.  Well played Dunkin’.  While Douglass was likely just trying to avoid any ill will with Dunkin’ in an effort to preserve the trademark and eventually sell it to Dunkin’, his representation that he had no intent to actually use the mark will likely prove fatal.

While Douglass failed to successfully implement his cromunchkin plan, the plan itself was not flawed.  Many applicants register and use a trademark specifically with the long-term goal of selling the mark to an established business.  Proving the novelty of a new trademark, its lack of infringement on existing trademarks and the value of the trademark for subsequent sale can be a complicated process requiring extensive expert testimony.

An important takeaway from the cromunchkin catastrophe is to remember successful registration of an intent-to-use trademark requires bonafide intent to use and actual use of the mark within six months of the filing or appropriate establishment of the need for an extension.

Let’s hear from you, BullsEye readers.  Have you faced an issue with an intent-to-use application where the intent was questioned or the use was not established within six months of filing?  What types of intent or use are passing muster with the USPTO?  And, who has a bonafide intent to consume a Croissant Donut in the near future?  We’re here to help: Dunkin' Donuts Store Locator