If you love coffee (or loved the Seinfeld episode in which Kramer sues Java World), then this case is for you – a 7th Circuit decision reversing a denial of class certification in an action by coffee drinkers against a manufacturer that allegedly violated consumer protection laws in its efforts to gain a foothold in the K-Cup market. Suchanek v. Sturm Foods, Inc., 2014 WL 4116493 (10th Cir., August 22, 2014).

As readers are undoubtedly aware, K-Cups are pods filled with coffee grounds that can be dropped into Keurig coffee machines to quickly produce a high quality cup of fresh-brewed coffee.  For many years, Keurig held a patent over the filtering technology used in K-Cups, thereby barring competitors from selling their own Keurig-compatible pods. Anticipating the expiration of Keurig’s K-Cup patents in 2012, the defendants hatched a plan to gain first mover advantage in the post-patent K-Cup market.

The centerpiece of the strategy was a pod (branded “Grove Square Coffee” or “GSC”) introduced by the defendants in 2010 that mimicked the K-Cup design. Except that to avoid infringing Keurig’s still-valid patent, the GSC pods lacked a filter, thereby making the use of fresh coffee grounds impossible. Instead, the defendants filled their pods primarily with “instant” coffee (for readers unfamiliar with the difference between “instant” coffee and coffee grounds, the former quickly dissolves in hot water (and costs less), while the latter must be “brewed” (and costs more due to perceptions of higher quality); see Wikipedia for further details).

Defendants’ packaging glossed over the crucial distinction between the innards of their GSC pods versus Keurig’s pods, featuring images of K-Cups and fresh roasted coffee beans, and stating that the GSC pods contained “naturally roasted soluble and microground Arabica coffee.” What the packaging didn’t explain is that “soluble coffee” is “instant coffee,” and that the amount of coffee grounds in the pods was trivial (added primarily to dust the chunks of instant coffee). 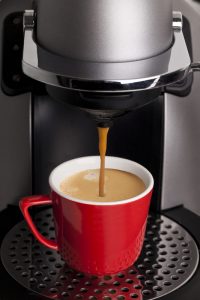 Defendants hoped consumers wouldn’t notice the difference, but that expectation did not come to pass. Within days after the launch of the GSC pods, complaints started rolling in with one retailer calling GSC the “poorest performing introductory product that we have had in our 12 year history.” Several angry consumers subsequently filed class action lawsuits charging defendants with violations of state consumer protection laws prohibiting deceptive advertising and marketing.

The district court denied class certification on the ground, among others, that there were no questions common to the class, as required under Rule 23(a)(2) of the Federal Rules of Civil Procedure to maintain a class action in federal court. The 10th Circuit disagreed, ruling that whether the GSC packaging was likely to mislead a reasonable consumer was a question common to the claims of all putative class members. In support, the 10th Circuit referenced three expert surveys in the record – all of which concluded that few consumers understood the true nature of the GSC product. One survey, conducted by the plaintiffs’ expert, found that only 14% of respondents understood that the GSC product contained primarily instant coffee. A second survey by defendants’ expert found that only one out of 151 respondents equated “soluble coffee” with “instant coffee.” Finally, a third expert found that nearly all GSC pod purchasers expected the product to yield filtered ground coffee, and almost none of those purchasers expected the product to contain instant coffee.

The district also denied class certification on the ground that individual issues related to causation would predominate over common questions of law or fact, in violation of Federal Rule 23(b)(3). Again, the 10th Circuit reversed, observing that “[e]very consumer fraud case involves individual elements of reliance or causation.” Instead, the 10th Circuit instructed that the appropriate initial inquiry is whether class damages can be accurately measured. On this point, the Court cited the report of plaintiffs’ expert suggesting that “damages might be computed by taking the difference between the actual value of the package [plaintiffs] purchased (instant coffee) and the inflated price [plaintiffs] paid (thinking the pods contained real coffee grounds).”

Based on its analysis, the 10th Circuit vacated the lower court’s denial of class certification and remanded for further proceedings consistent with its opinion. Clearly, trouble is brewing for the defendants.

Rather than seeking commentary on the Court’s legal analysis, we’re actually curious, how many of you are coffee drinkers? For those who are, how many of you were “victims” of the GSC pods masquerading as fresh coffee grounds?

An NYU School of Law graduate, Joshua has been practicing as a litigator for over twenty five years. Joshua has published regularly on legal marketing topics in numerous law-related periodicals, and presented on legal marketing technologies to various bar and legal marketing associations.   Mr. Fruchter is a recognized voice in litigation commentary, who has discussed issues ranging from Daubert analyses and inventor testimony in patent litigation, to predictive coding in document reviews.