Got Secrets? Protect Them with a Federally-Issued Gun

Trade secrets are protected, right? They cannot be stolen or misappropriated, right? You are probably shaking your head at this. Right, right. But if they are, what can you really do about it? Have the grubby thief thrown in jail? Sure, but that’s not going to restore your loss—get you back the money you are now not making because your blueprints, your formulas, your client lists, etc. have been misappropriated. You could sue, you might be thinking. You could. But previously you could only do so in state court, through an often unstructured and painfully slow process. With the recent passage of the Defend Trade Secrets Act of 2016, that has changed. That state court trade secret action now looks like a slingshot compared to the weapon the Feds are delivering. Consider it a gun. A very big and federally-issued gun. 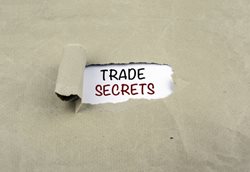 Subject to various limitations, the Act also provides ex parte property seizures where a plaintiff can enlist the federal government to seize misappropriated trade secrets without providing notice to the alleged wrongdoer. Wait, what? The government will find your disgruntled employee, sneak up on him, and get your blueprints back. That’s a pretty powerful arsenal. If the federal cause of action is the gun, consider the property seizure a big net. Catch the perpetrator with your trade secrets, recover your valuable information, and you still get to shoot the guy - in the wallet, where it counts.

In all, the new Defend Trade Secrets Act is expected to open many doors for companies struggling to protect valuable intellectual property. We anticipate many trade secret misappropriation suits will be filed in federal court now that the Act has passed. If you’re currently exploring recovery options for trade secret theft, give this one some thought. One of the primary types of trade secrets many companies fail to properly protect are customer lists. Think of the information you maintain about your customers that is not publicly available: their buying habits, shipping preferences, birthdays, anniversaries, family member names, unlisted numbers, staff member names, and contact info, etc. Looking at it this way, you can easily see the value in it.

Such details about your clients and customers—those that are not generally known or easily attainable—are what make your list a trade secret, as well as your investment in and efforts to compile these types of details and keep the list a secret. If it’s digital, keep it password-protected, and on a separate hard-drive locked in a safe. Implement policies among your staff to maintain its secrecy. These safeguards can enable you to establish the list as a trade secret and defend it in federal court.

Do you think the Defend Trade Secret Act finally offers trade secret holders equivalent protection under federal law as that of patent, trademark, or copyright owners? Are you anticipating a flood of trade secret misappropriation suits in federal court now that the act has passed?