Considered an IT legacy by many, IBM has assembled an impressive portfolio of e-commerce related patents that it aggressively enforces against alleged infringers. Expert witnesses play a key role in these enforcement efforts by analyzing the extent to which competitors have incorporated the methods described in the patents into their websites.

On July 27, 2018, IBM triumphed over Groupon when a jury awarded $82.5 million to IBM after finding that Groupon had intentionally infringed four of IBM’s e-commerce patents. The “intentional” finding was particularly significant since it would have allowed the judge to increase the damages. But on October 1, 2018, IBM and Groupon announced that they had settled all of their pending patent litigation for approximately $57 million paid to IBM and a long-term patent cross-license agreement between the companies. IBM also agreed to consider offering Groupon’s services to its employees.

While IBM and Groupon have resolved their differences, the history of their litigation offers an interesting look at how leading technology companies have used patent lawsuits to fight for a piece of the growing e-commerce pie. 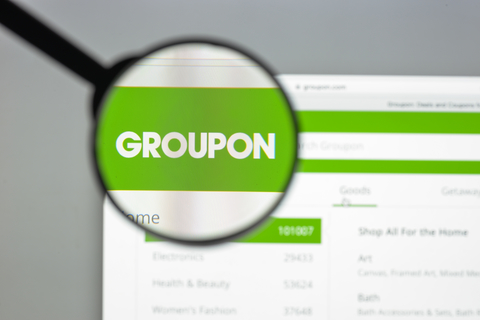 Patents and E-commerce
The patents that had been at issue in the case are highly technical, but immensely valuable to e-commerce providers. The first patent, the ‘601 patent, describes methods to preserve information transmitted between users’ computers (referred to as “clients”) and a vendor’s servers during online communications. By way of background, in order for a visitor to view a page on a website, the client transmits a request to the server, and in response, the server displays the page. When the visitor clicks a link on the requested webpage to visit a different webpage, the client sends a new request to the server. These ongoing communications between the client and server are handled using a protocol called HTTP.

HTTP is a “stateless” protocol, which means that it does not keep track of the information passed back-and-forth between the client and server during online conversations. Thus, for example, if a client requests the same webpage numerous times, the server does not maintain a history of those requests. While a stateless protocol provides for simple and efficient communication between clients and servers, it poses problems for e-commerce transactions. For example, it is desirable for a server processing online orders to keep track of a customer’s product selections while the customer continues shopping, and then recall those selections when the customer is ready to check out and complete their purchase. The 601 Patent improves on earlier methods for preserving information (or “state”) in a stateless protocol by embedding information in hyperlinks during the back-and-forth communications between the client and server.

346 Patent
The second patent, the ‘346 patent, improves upon existing single sign on (“SSO”) technologies for authenticating users when they seek to log in to a particular application. Prior methods require a user to have a preexisting account with an e-commerce provider in order to log in, and require repeated sign ins each time the user wishes to access the provider’s application. The ‘346 patent improves on existing SSO technology by creating an “identity provider” that authenticates a user on behalf of a collection of applications (often sponsored by different enterprises) within a connected computing environment, and shares the user’s credentials with all applications within that environment. In this way, users can access the various applications within the environment without having to log in and separately authenticate themselves with respect to each application.

697 and 849 Patents
The third and fourth patents, the ‘967 and ‘849 patents, concern methods to facilitate access to interactive applications (such as electronic banking, travel reservations, home shopping, and current news) to millions of simultaneous users with minimal response times. The ‘967 patent claims methods for storing structured collections of data known as objects on a user’s personal computer for easy retrieval on an as-needed basis in response to user requests. This technology streamlines use of an interactive service.

The ‘849 patent provides a method for presenting relevant advertising to a user of an interactive service without distracting the user, or disrupting the user’s session, by structuring the advertising as data objects.

Groupon hosts an interactive e-commerce marketplace that offers discounted products and services from local merchants to its subscribers. It is thus easy to envision how IBM’s e-commerce patents could add value to Groupon’s business.

The Trial
Prior to trial, Groupon moved for summary judgment that it did not infringe any of IBM’s patents. On June 18, 2018, relying heavily on expert testimony, the Court denied Groupon’s motion in its entirety. The Court noted that the parties’ dueling experts raised disputed questions of material fact concerning Groupon’s use of the methods described in IBM’s patents.

At trial, IBM noted that other e-commerce companies such as Amazon, Google, Twitter and LinkedIn had paid between $20 million to $50 million to license its thousands of patents. In a similar infringement action by IBM against Priceline, Priceline agreed to settle on three of the four patents. While IBM’s litigation with Groupon seemed poised to drag on, both sides apparently decided that it was time to throw in the towel.

According to reports by Bloomberg and other major media outlets, IBM’s trial attorney—John Desmarais—noted that recent reforms designed to fight abuses in the patent system have led more companies to litigate IBM’s licensing demands. “It's put companies like IBM, who have real portfolios, real R&D investment dollars, in a situation where they have to go to court,” said Desmarais. Whereas prior to the reforms, the dispute with Groupon would have likely been resolved after a couple of meetings. However, in the present climate, it consumed millions of dollars in fees and expenses before it settled.

In the complex patent litigation environment, IMS ExpertServices remains the trusted partner to the world’s most influential law firms—and the global clients they serve—by providing experts across every industry and discipline.