Ahhh … LIBOR, the rate everyone loves to hate. We are all fairly familiar with the London Interbank Offered Rate, the average of interest rates estimated by major banks across the world that they would be charged were they to borrow from other banks. We’re likely also familiar with the 2012 LIBOR scandal that revealed significant fraud and collusion among member banks relating to their rate submissions. But what you may not know, is that, according to the Fourth Circuit in a recent opinion, if you are a debtor who was forced to foreclosure in bankruptcy as a result of the LIBOR sham, you may have no recourse against the bank. 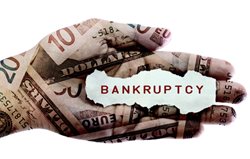 It’s called res judicata. It means you only get one shot at litigating a claim. While the doctrine is well known and generally well supported, it was interesting and a bit controversial to see how the Fourth Circuit applied it in this instance.  Here’s what went down. In 2006, the debtor, Providence Hall Associates, obtained a $2.5M loan from Wachovia for the purchase of properties which was subject to LIBOR-based interest rate swap agreements. In 2011, when the real estate market crashed, Providence struggled to pay. Wachovia (by then Wells Fargo) declared the loan in default, and Providence filed for bankruptcy protection in hopes of avoiding foreclosure. Wells Fargo fought back with a fury, demanding a total amount due nearing $3M as well as an additional $300k in termination charges. Wells Fargo demanded conversion to a Chapter 7, which the bankruptcy court refused. It did appoint a trustee for Providence and approved an agreement to sell two properties to satisfy the debt. Cue the foreclosure and entry of a bankruptcy sale order on the record which the Fourth Circuit deemed a “final judgment on the merits” in its decision to preclude Providence’s subsequent fraud suit against Wells Fargo after it learned of the LIBOR scandal.

How does that sit with you? Procedurally, before delving any further into the facts, do you believe a bankruptcy order for foreclosure can stand as a judgment “on the merits” for a fraudulent lending claim? Do you believe an appointed Chapter 11 trustee has the incentive or means to pursue a heated LIBOR lending scandal claim in bankruptcy?

You may also be wondering why the LIBOR fraud claims were not raised by Providence in the bankruptcy. As counsel pointed out in the appellate briefs, Providence, like every other borrower at the time, did not know about the LIBOR scandal when it filed for bankruptcy in 2011.  News and knowledge of the scandal did not break until 2012. The Fourth Circuit dismissed this argument by stating knowledge of the scandal had broken by the time the bankruptcy sale order was signed. However, as Providence points out, after the trustee was appointed and as a debtor no-longer-in-possession at the time, it could not have litigated its fraud claim against Wells Fargo in the bankruptcy.

If you’re as intrigued as we are by this big win for the banks, let us know. We want to hear from you. What do you think of the Fourth Circuit’s recent “foreclosure” on the merits?