Make it Rain, Make it Stop: A Monopoly on Weather?

They call it “cloud-seeding.” It’s a process by which clouds are injected with a chemical to induce rain. It sounds a little like science fiction, but it’s happening in California—where droughts are deadly—and in other states across the nation. As scientific weather modification becomes more common and weather contractors are brought in to induce climate change, we have to wonder: Might there one day be a monopoly on weather?

It is hard to imagine a commodity more in demand than the weather. Imagine a world where you could 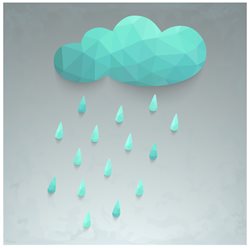 literally place an order for rain. The science known as “geoengineering” is an intentional, methodical intervention into the Earth’s natural climate system in order to bring about and counteract climate change. Cloud seeding has been used in Los Angeles County to battle the environmentally disastrous repercussions of drought, inducing much-needed rainfall. As a result, an approximate 15% increase rainfall has been estimated.

So how do companies hired to help with drought conditions literally “make it rain?” They use generators to shoot silver iodide into the clouds to produce more rain. It’s interesting to imagine the experiments conducted to test that model. However, many patents have been filed for weather modification systems of numerous varieties. If there are companies that know how to make it rain, you have to believe there are companies that know how to make it stop. Where rain might be needed to counteract detrimentally dry conditions in one region, like drought in California, dry conditions might equally be needed in another region to prevent damage caused by over-saturation—like flash flooding in Texas. Just as drought causes depletion of water reserves and spoilage of crops, too much rain can lead to excessive erosion, landslides, and sinkholes. Can weather contractors stop that as well? You bet - by seeding clouds with polymers that absorb aqueous solutions. You see, there’s an answer for everything.

These weather-defying acts are not without consequences, however. Study findings and weather contractors concur: rain inducement in one particular area can affect other areas in downwind regions. In other words, rain here may mean drought there. Flood-prevention here, may mean sinkholes and landslides elsewhere. Once you start tinkering with nature, the ripple effects are almost unpredictable. It would seem fiddling with the clouds in one area would require monitoring and likely more fiddling in neighboring regions. This is where we saw a potential weather conglomerate development. If it is possible to control all aspects, it could be possible for one conglomerate corporation to control weather everywhere. They might even create business by drumming up a drought in order to induce more orders for rain. Without competition, the sky is literally the limit as to what the Waldorf of Weather could charge for just one summer sprinkle. Then think about the military uses. Creating fog or heavy cloud cover over certain foreign regions to shield drones, heavy rains and winds over enemy campsites to prevent an invasion. Like many companies that now boast world market domination, initial growth for weather contractors might be spawned by the most profitable occurrence for most manufacturers of military-use products: a war.

While this type of growth may seem like pure speculation, cloud-seeding is happening now. Companies are being hired to both induce and stop rain, with the incumbent legal ramifications that must follow. We predict a growing need for geo engineering experts, as well as law firms to draft weather modification contracts, represent weather contractors in adverse weather liability suits, as well as ensure fair competition among the weather contractors.

What do you think would be a fair price to make it rain, or to make it stop?