Turns out, you can now tell your patent agent anything. Well, almost anything. In a recent 2-1 split opinion from the Federal Circuit, a new attorney-client-like privilege has been created between a patent applicant and his patent agent.

Interestingly, the opinion arises out of a closely-watched smartphone patents case between Queen’s University, a research facility in Ontario, Canada, and Samsung involving “SmartPause”─a technology that can actually sense when your eyes leave the screen of your phone and pause the video you were watching until your eyes return ─ a kind of creepy yet cool feature. Many patent attorneys’ eyes were on this opinion, however, not for a ruling on the patent issue but, more specifically, for a ruling on the privilege issue. Prior to this opinion, the District Courts had been split as to whether a privilege existed between registered patent agents and their clients. When Queen’s University refused to turn over some documents that contained communications between its employees and its patent agent, the District Court found no privilege existed and ordered Queen’s to turn over the records. But Queen’s wasn’t having it. A mandamus petition followed and all eyes were on the Federal Circuit as they took on this debated privilege issue as a matter of first impression. 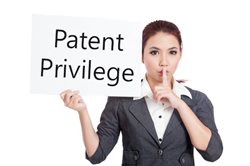 In the majority opinion, the Federal Circuit analogized patent agents to attorneys based on their unique ability to present patent cases before the USPTO, Congress’s recognition of their authority to act, as well as SCOTUS’s characterization of their activities at the practice of law. The Court also noted a finding of no privilege would undermine the intent of Congress in affording patent applicants the seemingly equivalent choice of going before the USPTO with an attorney or a registered patent agent. For this reason, the Federal Circuit fell in favor of finding a privilege, but with a catch. The privilege only applies to those communications that are “reasonably necessary and incident to the prosecution of patents before the Patent Office.” The court gave an example of a patent agent discussing the validity of another patent as a communication that would not fall under the privilege. We have to wonder whether this “reasonably necessary and incident” test will prove to be a murky standard over time.

In a dissenting opinion, one Justice expressed concern over the majority’s opinion, finding none of the factors that support creation of a privilege to be present in this matter. Rather, Justice Jimmie V. Reyna explained, “In the absence of a showing that there is a real need for a new privilege to be created, the need to ascertain the truth should prevail.”

Soon we will see whether this freshly sculpted privilege will prove to be a muddy mess or a SmartClause. Where do you stand? Are you in favor of the Federal Circuit’s newly defined privilege? Blink once for yes. Twice for no.