“I would hide my head in a bag,” Scalia said of the Supreme Court majority in his 2015 dissent in Obergefell v. Hodges. “The Supreme Court of the United States has descended from the disciplined legal reasoning of John Marshall and Joseph Story to the mystical aphorisms of the fortune cookie.” Whether you agree with his opinions or not, you have to admit they were so well-captured, so aptly stated, that they packed an undeniable punch. Scalia’s passion for his role as an interpreter of the law, coupled with his bold, charismatic personality made him, shall we say, annoyingly persuasive. Isn’t that a trait you want in an expert?

We all know Scalia was a scathing originalist. While he found it his duty to interpret the Constitution precisely the way the Founders would have when they wrote it in 1776, the intent of this role was to ─ as the Founders themselves recognized ─ ensure that law controlled government, not the other way 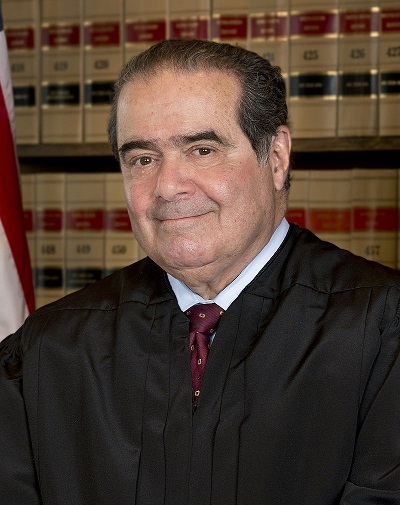 around. Scalia was often criticized in the legal world for his famous, yet entertaining ‘zingers,’ but he was never accused of being inconsistent. Ginsburg, the liberal linchpin on the bench, a champion of gender and gay equality, said of Scalia: “As annoyed as you might be about his zinging dissent, he’s so utterly charming, so amusing, so sometimes outrageous, you can’t help but say, ‘I’m glad that he’s my friend or he’s my colleague.’”

While Scalia and Ginsburg were self-proclaimed mutual “best buddies” on the bench, they never saw eye to eye when it came to legal opinions. “What’s not to like,” Scalia asked about Ginsburg? “Other than her views on the law, of course?” Yet the two shared a mutual respect and passion for interpreting the law. When Scalia wrote a biting dissent to Ginsburg’s majority opinion in the 1996 U.S. v. Virginia case that struck down the all-male admissions policy at Virginia Military Institute, Scalia provided a copy of his dissent to Ginsburg early as a courtesy to allow her to properly respond to it in her majority opinion. “He absolutely ruined my weekend,” Ginsburg said of the gesture, “but my opinion is ever so much better because of his stinging dissent.” It is this kind of mutual respect for the work that is being done that makes a better end product.

Professionals and scholars agree to disagree all the time. Whether you agree or disagree with Scalia’s originalist zingers, we can all agree he was a brilliant legal mind and a tireless public servant who gave his life to the court. He was also funny, charismatic, and creative in his analogies. These are all traits we desire in an expert because they make him, as Ginsburg alluded, annoyingly persuasive. If the other side’s expert is going Ginsburg with it, you want a Scalia in your corner to counter her, right? No one can ever fill the role of the original “originalist” expert, a passionate defender of our Constitution and a respected, lifelong Justice of the United States Supreme Court.