When the overall deal is for $365M, $10M starts to seem like a small penance to pay. That’s how far Apple was willing to go to acquire the fingerprint recognition technology that now fuels its very valuable and versatile “Touch ID” iPhone feature. But it seems the board of AuthenTec, the company that sold the technology to Apple, was willing to go even farther, i.e., into the gaping lion’s mouth of litigation, and the shareholders took a $10M bite. 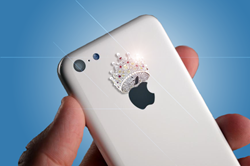 Let’s put you in AuthenTec’s shoes and see how you fare. The year is 2012 and you’re the slick, groomed CEO of a fast-rising techno company, AuthenTec. You have been busting your hump for years to hone the true asset of your company’s portfolio: fingerprint recognition technology. In this fast-growing eWorld, the ability to grant access or authority quickly and securely with the simple scan of a fingerprint on a touch screen will surely garner attention from the smartphone giants. Apple starts sniffing around and whispering sweet millions in your ear. The iGiant wants to merge to the tune of $365M, but the details of the deal are complicated.

While Apple has offered you a price—$8/share—that exceeds AuthenTec’s current share values, they also see the crown jewel of your portfolio and want to lock it up. Here’s what they propose: If your shareholders do not approve the merger priced at $8/share, Apple will still have the nonexclusive right to AuthenTec’s fingerprint recognition technology. Meaning, if a competitor came along, let’s say Samsung, and offered you $9/share, Samsung would be paying big bucks for a company whose primary asset is accessible for use by its competitor. The shareholders scream at you and file for a preliminary injunction to stop the merger, but the court denies it, saying they have a viable remedy with the ability to bring suit later and recover damages. You know this deal makes it very unlikely that any competitor would have an incentive to try and outbid Apple, but they’ve offered $365M. Your company right now is worth $18M. What do you do?

If you said, “Sell, sell, sell!” you’ve channeled AuthenTec’s own adventurous spirit because that’s exactly what the AuthenTec board did. Commentators speculated at the time the board had sold “to the sound of 1,000 lawsuits,” and the shareholders were quick to muscle up, bringing in top-notch corporate litigation takeover lawyers who knew they were facing a likely uphill legal battle. Not only is the presence of Apple in any courtroom daunting, but AuthenTec’s shareholders’ counsel also noted courts generally afford “substantial deference” to directors of public corporations when moving forward with complex mergers such as this one. To help persuade the court, counsel for the plaintiffs brought in top-notch corporate takeover expertise to back their theory: Harvard Law School professor, Guhan Subramanian. While Subramanian opined that the merger was improper because it curtailed any competing incentive to outbid Apple, AuthenTec’s expert, a former chancellor of the Delaware Court of Chancery, William Chandler III, found the deal was not an improper crown jewel lock-up because it did not involve a sale of the fingerprint recognition technology (which would preemptively freeze the asset), rather, merely an option to purchase a nonexclusive license to use the asset. A slight difference, but the type of discrepancy, when expertly presented, can win a case.

After months of mediation and negotiation, the parties finally reached a proposed settlement figure of $10M to be paid to the plaintiff shareholders. The proposal received preliminary approval from the court on August 2nd and is scheduled for final hearing and approval November 17th before the Brevard Circuit Judge in Melbourne, FL, where AuthenTec is based.

Where do you fall: In favor of AuthenTec’s arguably reasonable $8/share deal or on the plaintiff’s side where it is alleged the “crown jewel lock-up” thwarted any healthy competition?